From the minute I picked up Zen Chic Inspired, I knew I wanted to make the quilt On the Ball. I even had the perfect fabric in mind for it: a happy, colorful print with lots of circles on it by Cynthia Rowley called Paint Box.

But when I actually read the instructions, I was a bit dismayed ... because it involved slice and insert. The last slice and insert quilt I did was Think Pink, and getting those intersections to match was really difficult, if not outright impossible. And that one is a lot easier than this pattern!

So I put it on the proverbial shelf and didn't think about it any longer. But then one day, I suddenly got an idea after using a bias tape maker. What if, instead of slash and insert, I used a bias tape maker and then just appliqued the strips? I'd get a similar look but it'd be so much easier. 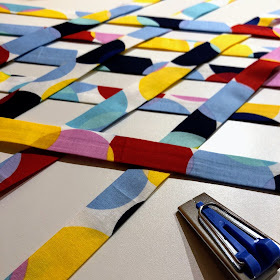 And it worked! The strips look totally continuous (because they are) and I wouldn't have been able to make them look so continuous if I did slice and insert. It was surprisingly fast to do as there was no pressing and no lining the pieces up. 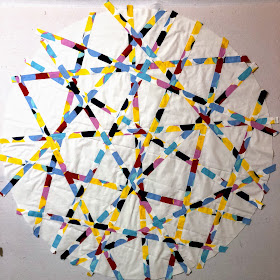 I'm very happy with it, and I think I got a very similar look to the original quilt, but it's much easier! I'm going to call this quilt Pick-Up Sticks, because that's what it reminds me of.