Haphazard is a quilt made of half-square triangles laid out randomly, and the fun part of this quilt is that the layout was completely computer generated! I wrote about this process here. After trying tons of parameters and cycling through many variations, I finally just picked one. 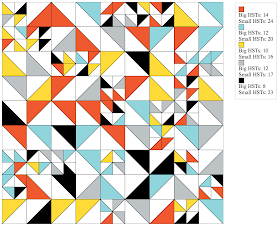 The fabric bundle I used is Creative Rockstar by Rad and Happy for Riley Blake Designs. (It was just begging to be made into a quilt with lots of half-square triangles!) I generated the cutting list with the program, so it was easy to just start cutting and piecing. I didn't end up following the pattern to the T, because that would be too much work, and the idea was that it was random. I followed it pretty closely, though, to achieve a similar effect. 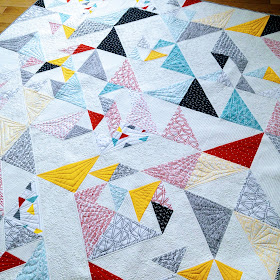 I quilted some dot-to-dot designs in the printed fabrics, like starbursts and flowers and such. I love those! They're so fun, and require no marking. (I'm an anti-marker.) But then I thought ... I really needed a feather! So I started throwing in feathers occasionally ... and they are some of my favorite foreground blocks. What can I say ... feathers are always a blast to quilt. In the background space, since it's all white, it's definitely asking for echoes and some really dense fillers. 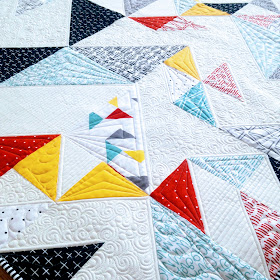 But a few blocks in, I realized the background was kind of boring. I wasn't particularly happy with it. All the designs look nicely executed, but the overall composition was lacking. So ... I added some straight lines to some of the background sections, and then I was really happy with it! 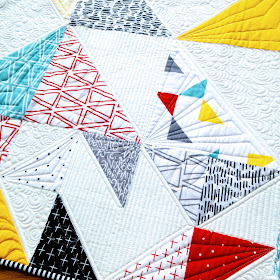 I used a solid for the back again, and in a quilt like this, the back actually shows quilting even better than the front! I also love the black/white striped binding. 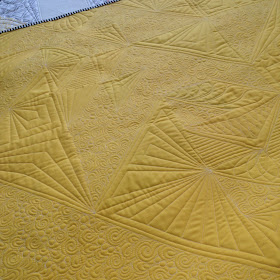 Making this quilt was mostly about the concept (randomly generated) and letting go of control (a little), and to that end, it turned out well! 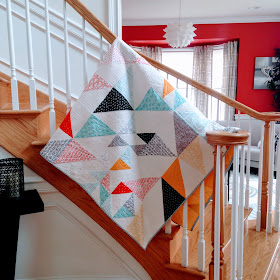 But wait ... there's more! I had so much fun generating patterns that I had to write a pattern generator for this quilt. you'll find it here. Pick your own colors and generate a random half-square triangle quilt pattern just for you!