I count myself an occasional weaver. I'm really not as much into it as I am into quilting, knitting, or even crochet, but I have so much yarn in my stash that I thought weaving would be a good way to use it up some. I also like plaids and log cabins and various other looks that can only be achieved by weaving.

However, I don't weave as much as I hope to, mostly because I hate warping, or more specifically, winding the warp onto the warp beam. A few weeks ago I finally did some warping ... and messed it up so terribly and discovered it so late that I had to cut the entire project off the loom. I almost cried ... one of the yarns I cut was really really precious to me.

The problem is my warp separator, which I use brown craft paper for. However, I'm unable to wind it onto the beam straight no matter how hard I try, and it wreaks all kinds of havoc if it's not straight. It's also rolled up, loud, crinkly, and annoying to use. I have to find something better or I might never weave again, and that will have let my precious yarn die in vain.

I saw a demo of warp sticks on YouTube and decided it looks like it's much easier to use than craft paper. However I cannot find premade warp sticks specifically for my 15" Cricket loom, so my husband improvised by cutting an acrylic sheet into the exact size and width I need. (They were cut to 3/4" wide by 15 1/2" long.)

I tried winding a warp last night, and like magic, they were so easy to use, and they seem to keep the tension even. I'll never get my other yarn back, but its death finally compelled me to find a better solution for warping, and now I might actually weave more. Here is the new scarf all warped and ready to weave. The warp stick is made of clear acrylic so it's very hard to see (you can see it poking out the warp on the picture in the right) but it does the job. 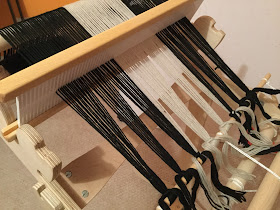 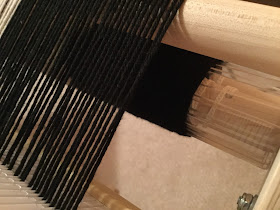