Does this look like I'm going to make a Christmas project? 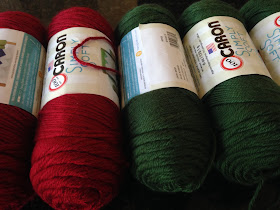 Well, I'm not. I would never put red and green together, for one. However, I've been a Harry Potter fan for 14 years, and I've known how to knit for 4 of them. I don't know why I never thought about knitting a house scarf.

That is, until this morning when I was suddenly ceased with the urge to knit a house scarf. I don't even know what house to knit for! When I try to sort myself at the various places online including twice at Pottermore, I always end up either Gryffindor, Slytherin, and occasionally Ravenclaw. (Never Hufflepuff, though). I don't really like Ravenclaw, so it's between Gryffindor and Slytherin. I can't decide.

So I'm going to knit 2 house scarves at the same time. It's too bad I felt the urge to knit a house scarf today and not a month ago, for I'm going to Fantastic Beasts and Where to Find Them next Thursday, and I would love to wear a house scarf there. But since it's only a week away, I just can't finish it that quickly. 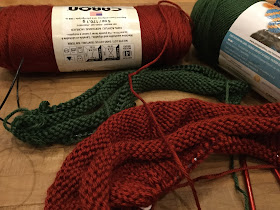 Oh well. There's plenty of other opportunities to wear them.