Phases of the Moon Quilt

I drafted the pattern and cutting list for a chain link style quilt in April, but then other projects kept queue jumping so I didn't get a chance to make it until now.

The fat quarter pack I'm using is from Spoonflower's Phases of the Moon contest in 2015, and it was special because it was a Christmas present from my husband who knew I was going to get into quilting before I did, so I had a lot of trouble actually using it. It became even harder when I finally opened it up and saw all the loveliness, and it was quite difficult to cut into them! I have to keep reminding myself that it's not actually going away, and I can see it much more once it's in a quilt.

First I cut out all the items according to the cutting list so that they can be ready to be pieced. I enjoy cutting fat quarters a lot but cutting yardage is quite boring. Luckily the whole process is sped up tremendously by my Stripology ruler, which is my favorite specialty ruler. (Normally I'd put a label on each stack so I know what's what, but in this case there are few enough of them and it's obvious what's what.)

This is one of the times when I actually laid out the pieces on the design board before I even start piecing, because I needed to know which squares are framed and which ones are floating. I played around with the arrangement a bit before I was satisfied it seemed random enough. 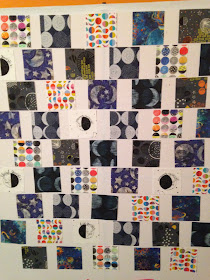 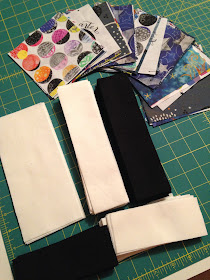 Now, on to chain piecing. Chain piecing is one of those super efficient "inventions" that once you start doing it, you try to incorporate it into every thing. I chain pieced every block on this quilt. 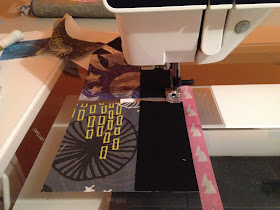 Finally, it's assembly time, which I don't usually do chain piece style, but I decided to try it on this quilt. It takes a little more organization to make sure things don't get messed up, but in the end of it's quite a bit faster than one row at a time. The hardest part of assembly is joining the rows, as that's when things can get misaligned, especially in this situation when there are no seams to nest, but it's so great watching the quilt finally come to life as it gets assembled.

Now it's all ready to be basted to quilt. I don't know what I'm going to quilt yet, but I'll have fun dreaming it up. 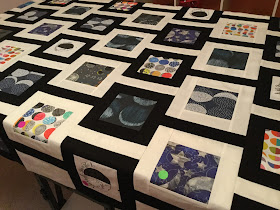