The Kimono Runner was the first table runner I ever made, a little over a year ago. The original pattern was not a quilt, in fact it was more of a scarf and the way it was constructed required sewing perfection in order to not have puckers. Well, I didn't have sewing perfection a year ago (nor now) so my end result was full of puckers that really bothered me. I was really, really in love with the fabric though.

I decided to turn this runner into a quilt so that the puckers will be disguised as texture, and so the runner will have more body to it. The sides and back is all one continuous piece, so I cut down the back and flipped it open, then trimmed the sides. The ending result is wider than the original runner, which is what I was going for. 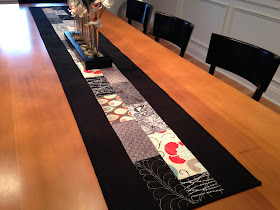 I quilted the black side borders with Angela Walter's "wavy wavy" design, a free-motion design that's shockingly easy but provides such beautiful texture. Angela is such a genius! I really struggled with the middle section, however. I couldn't find a blending thread that worked for all the colors, so I had to use a lighter thread which showed all too well on the darker fabrics. But I preferred that to using a darker thread as I *hate* the look of a dark thread on lighter fabric. I really didn't want to obscure the print, yet the piecing job wasn't totally flat so I had no choice but to quilt it more densely. I ended up doing a corner to corner feather design. 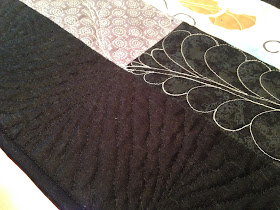 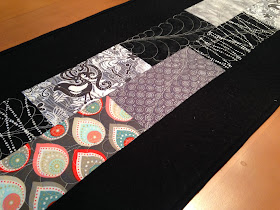 I'm debating whether feathers are the right choice for the middle section, but I had so much fun actually quilting them. Feathers are not my favorite design overall but they're by far the most fun for me to quilt. I'm addicted to quilting them, there's something that feels so good about fanning out every plume.

I think I could have mulled over it for much longer and maybe, maybe come up with a better design, but who knows how long that will be and finished is much better than perfect.