A Tale of Two Needles

One day, I was sewing a binding on, and as I was turning a corner, "crunch." Or, that's what it sounded like. I've never heard that sound before, so I knew something wasn't right. Sure enough, my needle tip was hanging off on a thread, cleanly broken off. This was my first ever broken needle. I wasn't doing anything out of the ordinary, and I definitely wasn't sewing over a pin. I replaced it with a new needle, and kept going.

A few hundred more stitches later, I got to another rather thick spot, and "crunch", that sound came again. This time, I realized the needle wasn't broken, but the tip was completely bent, at a 45 degree angle. What was going on? I was using a 90/14 topstitch needle, which is the appropriate size for what I'm doing, and I've broken 2 in two days. I've never had this happen before. Could my machine be having problems?

Then, as I looked at my needle stash, I suddenly realized what was going on. I always used either Inspira or Schmetz needles in the past, but just recently I popped in Singer's as I had them lying around, and the needle I just broke was also Singer's. They were all made for all domestic sewing machines, what's the difference? Turns out, there's a huge difference in quality. 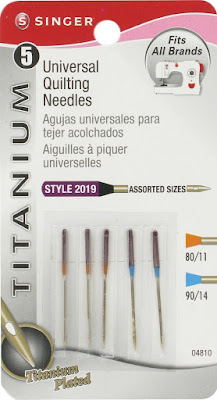 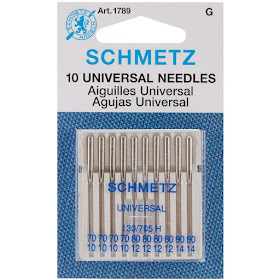 I know now to stick with the German engineered needles. They aren't even necessarily more expensive! But they're a whole lot more sturdy, I've never broken one even when I don't switch them out enough.