Bridges is a pattern by Anne Sullivan that appeared in Modern Monthly of the Modern Quilt Guild 2 years ago. As soon as I saw it, I knew I wanted to make it, even though at the time my curve piecing skills were non-existent. Now that I'm a little better at it, I can finally take a crack at this! 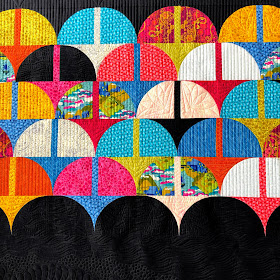 I used the fabric collection Diving Board by Alison Glass, which I thought was very fitting given the theme. The pattern is for a wallhanging size, so I expanded it to be a throw sized quilt.

When picking quilting designs, the first thing I look at is what the theme of the quilt is. In this case, the inspiration is clearly suspension bridges, so the quilting followed that. 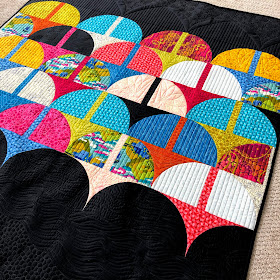 The part above the arches is the sky, so I quilted swirls and added an extra row of bridges with the quilting. I like to do these types of ghost blocks a lot, because they add visual interest and fill up space, so I don't have to do as much filler quilting. 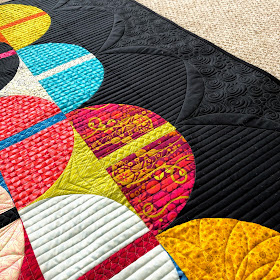 The printed fabric is quite busy so I just did straight lines and some dot-to-dot quilting in the bridges. The straight lines further emphasize the suspension bridge theme. 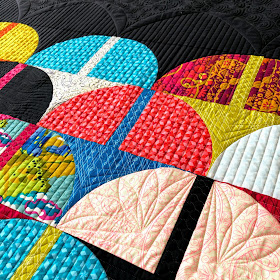 The portion below the arches represents water, so I got to practice a design that I really like but still struggle with, which is wavy lines. The main challenge is working this design so that I'm never quilting from right to left for too long a distance. Otherwise my stitch quality deteriorates and eventually the thread shreds. 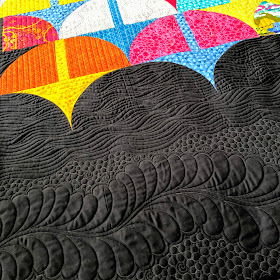 I could have filled up that whole region with wavy lines, but I decided it would be boring, so I added some elements for more visual interest. And why not a feather? It can represent an underwater plant of some sort. And at the last minute, I decided to throw in a treasure chest. I've never quilted something quite so literal before, but it was fun and adds some whimsy. 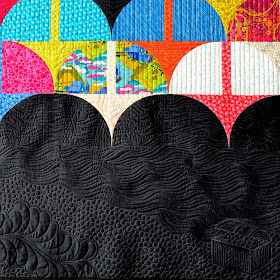 To be honest, I didn't like this quilt top a whole lot when I was finished with it, so I took some liberties with the quilting and was more experimental, but the quilting totally saved it for me, and I sort of love it now!

Linking up with: My Quilt Infatuation, Busy Hands Quilts, Confessions of a Fabric Addict, Cooking Up Quilts, Powered by Quilting, and Meadow Mist Designs.