Last year I found out about Quilt Expo literally the day before by a complete accident, but this year I marked it on my calendar and planned ahead, and I went with a blogger friend who lives in the next town over.

Although I usually take some photographs of my favorite quilts, I didn't do that today because I wasn't feeling too hot and the place was so crowded. I did see a lot of gorgeous quilts of course, and my favorite display has to be the kid quilts exhibit. There were kids as young as 5, making quilts, and doing beautifully!

I already have a longarm and don't feel the need to upgrade right now, but that doesn't mean I'm not still curious to try other longarms. Back in April when I was longarm shopping, I tried a bunch of machines and some of the longarms felt so heavy and clunky. I wasn't sure how much of that was due to the fact that I didn't know what I was doing. So now, I wanted to see if they would feel any different. Well ... I'm more sure than ever that I made a great choice in my APQS Lenni! Some machines still felt like I was driving a truck, but the APQS machines were by far the smoothest machines I tried today.

I stopped for a demonstration of a fabric weaving method using a tool called WEFTY. In fact, the person who demonstrated it was none other than Tara, who invented it! As she told me about how she started doing it by printing it on her 3D printer, I was utterly amazed. The fabric panel she created is so beautiful, unique, and has a great texture. I picked up a WEFTY and I'm curious to give it a try sometime!

I used to go crazy at quilt shows, but recently, I'm starting to spend less and less money. That's probably because I already have all the tools and notions, and I've already seen most of the fabric online. But I was happy to pick up a few kits and of course, WEFTY! 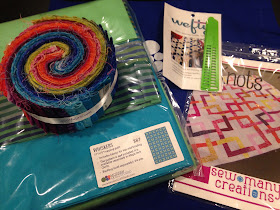 The next show I'll attend will probably be the Original Sewing & Quilting Expo in Schaumburg. It's small, but it's a mere 15 minutes from my house. Hopefully I'll get to take some photographs of the quilts in that show, and have more room to move around!