Apparently there's a day for everything. I had no idea that September 16th was National Sew a Jelly Roll day until it kept showing up in my social media feeds, along with pictures of delectable quilts and jelly rolls. Well ... it worked, because suddenly I was seized with the urge to sew a jelly roll quilt.

I sort of have a love/hate relationship with jelly rolls. On one hand ... I love them because they're so adorable and so convenient. But mostly the adorable thing. On the other hand, I've gotten far too many jelly rolls that are either too wide or too narrow, and they make precision sewing difficult ... like it isn't hard enough as is! (I've even gotten some bowed strips ...) But despite my best efforts, I still managed a little collection of jelly rolls. 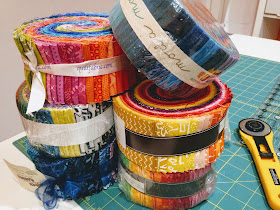 Well, it's time to use some. I've spent some time looking for patterns, and getting ideas of what I want to do. I collected my top contenders into a Pinterest board.

After careful consideration (and there's quite a few on there that I plan to make) I think I'm going to start on Zen Cabin!

The jelly roll I decided on is Urban Artifacts by Leslie Tucker Jenison for RJR Fabrics. It's one of my favorite collections this year. Before I started, I measured ... and sure enough my strips were a smidge too narrow. Well ... that's the good thing about not using a quarter-inch foot, and using my standard zigzag foot but adjusting the needle position. I was able to sew a smaller seam allowance, and pretty much get my blocks to come out the size it's supposed to be. 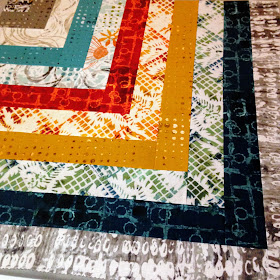 I'm so excited to keep going! I think it will be a great quilt, and my, I just love that fabric!