I'm a huge, huge fan of Angela Walters, so imagine how excited I was to find that Craftsy was releasing something called The Midnight Quilt Show hosted by Angela Walters. It premiered on Dec 7, and for a few weeks there, Wednesday was my favorite day of the week. Season 1 is over now, but Season 2 should start in March.

And of course, it is so enjoyable. Angela is hilarious, some of the things she says are t-shirt worthy. Though I've never felt compelled to make a star quilt before, after watching the very first episode, I suddenly really wanted to make one.

I chose one of the bundles I'd been hoarding, True Love by Libs Elliott. The quilt is basically half-square triangles, so it came together pretty quickly and easily. I used Essex Linen for the background for the first time ... and I really love it! It didn't seem more difficult to work with than 100% cotton, but has that great hearty feel to it. 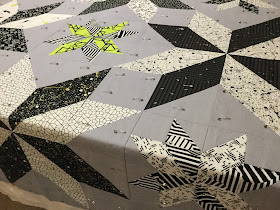 For the quilting, Angela did a beautiful design on the quilt in the show, and it is quite breathtaking. I borrowed from her design quite liberally, I must say. But they are actually great quilting design principles in general.

1) Highlight the focal point with a different design, in this case, the focal point is the star in the middle of the quilt.
2) Incorporate a mix of straight lines and dense quilting, which looks more interesting than either by itself.
3) Echoes are your best friend.
4) Feathers add instant elegance. (They're also ridiculously fun to quilt. For me, at least.)
5) Employ contrast. 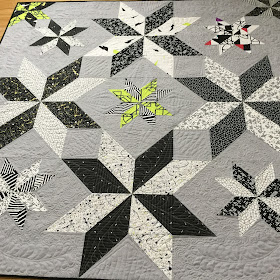 Detailed shots of the quilting. Because that's what really makes the quilt, right? 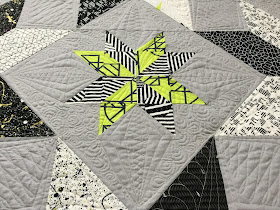 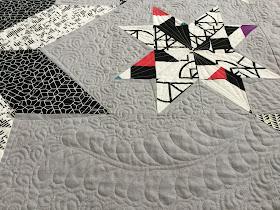 Angela made it look like she completed this quilt in one midnight session ... as for me, I know I took much much longer than that! But I savor every stitch.

This post participated in the link party at Busy Hands Quilts, Crazy Mom Quilts, Sew Can She, and Confessions of a Fabric Addict.