I recently finished the Building Blocks Sampler quilt which was a quilt block-by-block, then assemble together with finishing strips method of Q-A-Y-G (quilt-as-you-go) quilting. Long before I was comfortable quilting larger quilts, I had been attracted to the quilt-as-you-go method because the idea of quilting small blocks at a time was less intimidating, yet somehow I never actually did any quilt-as-you-go projects until *after* I had quilted larger sized projects. But now I can compare whether I prefer this method over the traditional method. Well, I definitely prefer the traditional method!

First of all, it's really not any faster for me. The time I save from not dealing with drag is quickly offset by the extra time it takes to cut, prepare backing, baste, and quilt each block individually. Preparing the finishing strips is more work and more painful than preparing sashing, and assembling the blocks is also much more annoying than attaching sashing or nesting seams is. All the extra structure of the finishing strips makes this quilt far stiffer than anything I've made before, which might not be a bad thing if this was a wallhanging ... but it's not.

However, I'm glad I gave this method a try, and now can tuck it in my arsenal for potential quilting methods when appropriate. 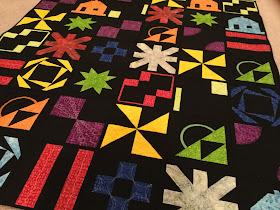 Since this is a sampler quilt, I had a lot of fun quilting different designs for each block and practicing a number of things including geometric allovers, feathers, swirls, pebbles, paisleys, and lots of other fillers. It's really hard to photograph them though because I did this in black and batiks. 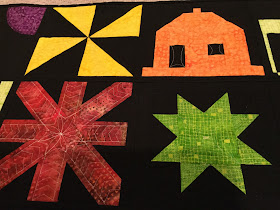 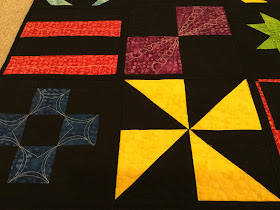 I used a layer cake for the back so the back of the quilt is actually pretty too, at least from a distance. 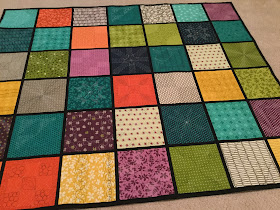 For the most part I enjoyed the black with batiks look, but it is a little bit severe given how much negative space there is in this quilt. I'll have to give that some thought the next time I choose my colors.