I'm sort of a weaver in addition to the other crafts I do. At least, my loom downstairs tell me so. I'm such a beginner on weaving though, and I don't think I can say I've fully gotten into it yet. That's not to say I won't become addicted at some future point, but I'm not there yet.

I recently acquired some yarn from a yarn-of-the-month club that while it is a great blend and also feels nice, is really not my color. The yarn is a blend of 51% silk and 49% bamboo, which means it'll drape really, really beautifully, but it's a spring green with some orange pink, very bright and absolutely not my favorite color in the world. I decided the best thing for it is to become my weaving experiment. I also had quite a bit of brushed cashmere yarn that I picked up for super cheap at a yarn store that was going out of business on hand, that I think the two might work well together. I have no idea though, it's all just an experiment! 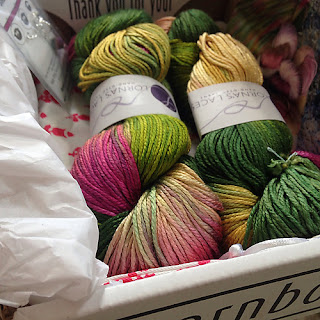 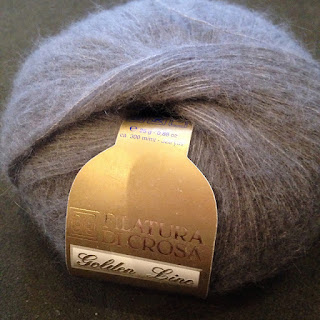 My plan is to weave something that's very loosey flowy and drapey, to highlight the ethereal nature of the brushed cashmere yarn. I used my 8-dent reed and made it about 10 inches wide. The worst part of weaving is winding the warp, I find, though unlike the last 2 times I did it, this time I both used a warp separator and had help holding the tension. I didn't realize until I was nearly done, that this so-called "Worsted" weight yarn is almost 12 wraps per inch, and that I should have used a 10-dent reed. Using a 8-dent reed makes this extremely open, more than I had intended. But I'm not going to redo it at this point, this whole thing is an experiment anyway, and if it goes awry ... oh well. I doubt I'd end up with something completely unsable, but it might be more suited for summer than fall at this rate! 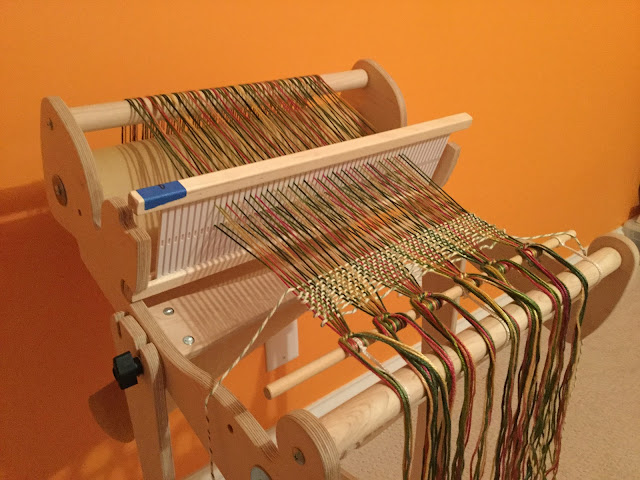 All ready to weave!