When I learned about 9-patches early on in my quilting life, my first impression of them was that they had a checkerboard look, which I wasn't fond of. However, a very quick search on Google led to some gorgeous 9-patch quilts, and one of them in particular made an impression on me due to the quilter's color choices. Charming Plus Quilt by Sew Mama Sew was the basis for my quilt. However, her quilt was 36" x 42", which is a good size for a baby quilt, but I wanted to make a lap quilt. I made each individual square 3" instead of 2", so that I ended up with a quilt that was 54" by 63". 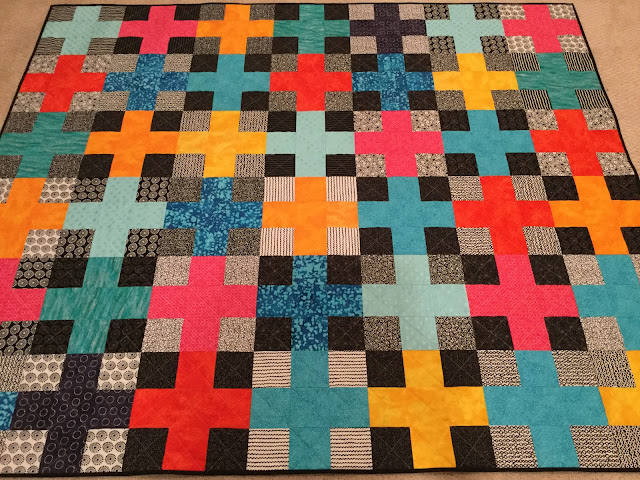 I used a black / white layer cake that I really treasured, in addition to some random fat quarters I had. I basted differently than I had done before, and I much like my new method for basting. For the first time, it didn't leave me the problem of excess fabric that led to puckering and distorted blocks. For quilting, I did a diagonal grid, as the 9-patch was just asking for it. 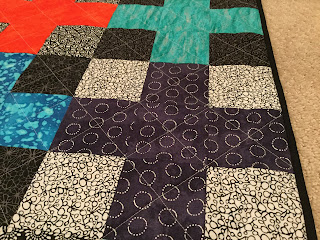 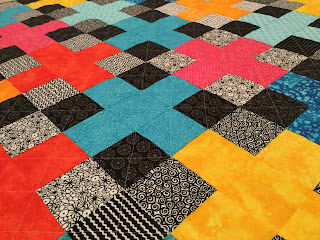 Visually, I'm very happy with this quilt, but it feels different from everything else I've made, because it is the least densely quilted of all by far. I'm in fact a little uncomfortable with how much less quilting there is here, even though the batting's specification says it's okay. As a result, it is a much softer quilt than my others, but it makes me feel a little nervous at the same time. Time will tell if it will hold up!